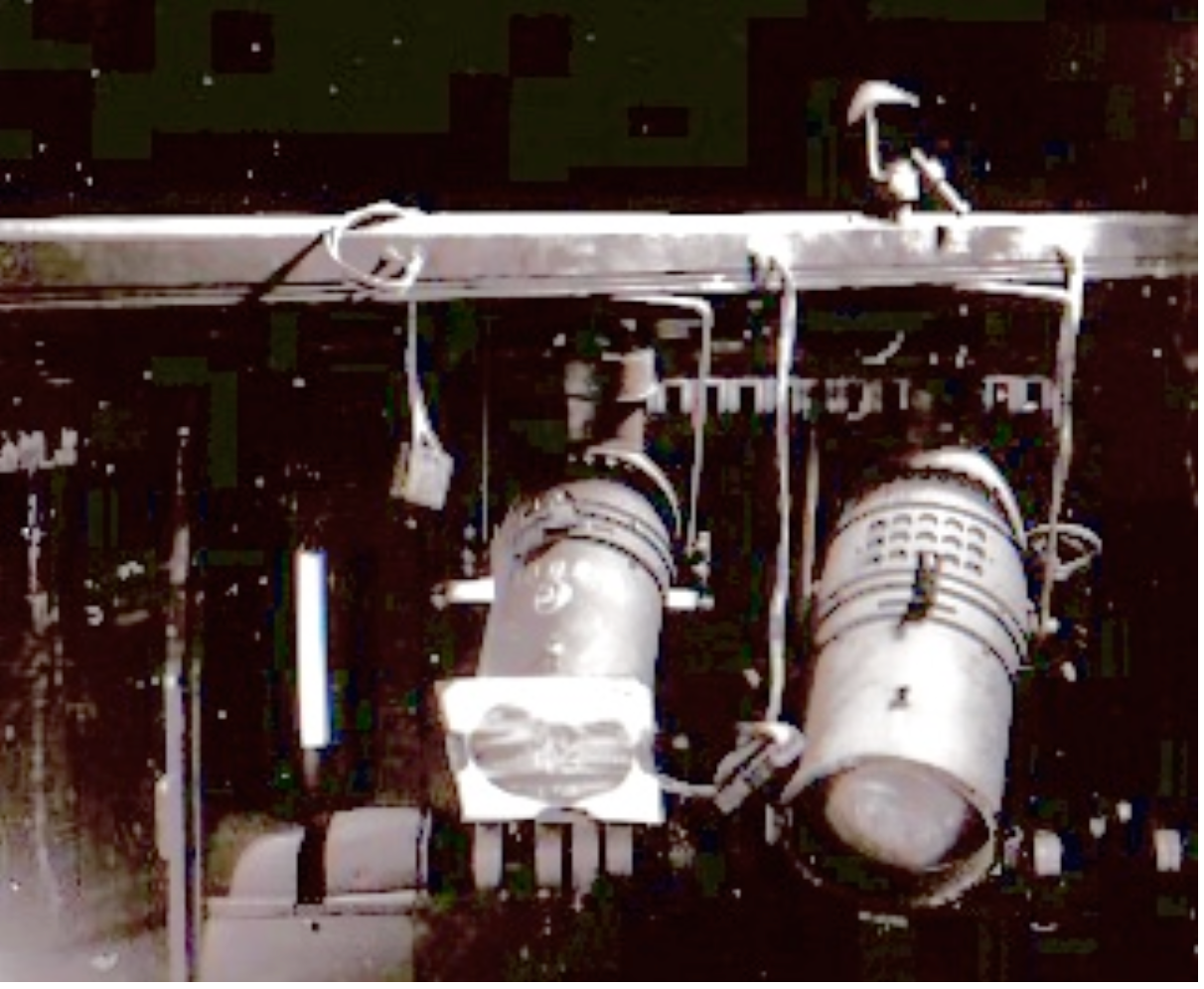 On the 3rd of June 1972 the Rolling Stones played the first date of their U.S. tour, with a ground-supported double-row, drop-frame truss of PAR64s.

On these two could be found just about every essential component of the tour lighting system of the 1970s (save chain motors for rigging it).

During the 1970s, tour lighting pioneers on at least two continents would evolve increasingly efficient approaches to such systems; many of which would find their way into other forms of performance and event lighting.

Touring, of course, was hardly new. The maximum width of scenic flats had long been accepted as 5’ 9”, a legacy of the width of railroad boxcar doors, when rail had been vastly more efficient than road in trouping shows.

The techniques used for lighting more traditional forms of live performance on tour had generally not evolved beyond relying on theaters having existing rigging systems and front-of-house positions – and, still, left labor demands that could limit the light plot for a touring production to a fraction of the Broadway original.

In the late ‘70s, one of the recent, young generation of theatrically-oriented rental houses, Production Arts Lighting, determined to achieve the kind of efficiency improvement for theatrical and dance “bus and truck” as had concert touring years before; using similar techniques.

One improvement was to pre-hang overhead electrics on unistrut bars, which were then shipped on racks, and suspended from house pipes by clamps.

Soon after, I was researching a series of articles for Lighting Dimensions about what lighting’s future might hold. It was a time of great ferment. Beyond
the other new gear, new shops, and new manufacturers, the first moving lights were supposed to quickly sweep away the PAR. Dichroic filters would replace gels. Before long, hard edge fixtures would become DMM video projectors.

Of all the theatrically-oriented lighting shops on the East Coast, the king dinosaur was Four Star Stage Lighting, just into the Bronx. It had long dominated Broadway and related markets. And its equipment and operations could – and did – lag behind what was current elsewhere.

So, what brought me, with a camera, to Four Star’s warehouse? I don’t recall. But someone there suggested that I visit the basement.

And there I found:

We tend to assume that our industry progresses at the rate it does because it’s been waiting for clever folks like us to come along. That, because we haven’t seen something useful done, it’s because no one thought of it before (or having thought of it, never built it).

The lamp bars in Four Star’s basement weren’t my first clue that this might not be the case. And in researching this series, I’m finding more.

Beyond establishing that our history isn’t always what it’s assumed to be,
it’s a cautionary tale for those who believe in the inevitability of (as I titled that Lighting Dimensions series) a “Bright New World”; one of continuous progress and innovation.

The bars in Four Star’s basement predated what had seemed new innovation
in lighting, yet they’d already been tried at the leading edge of the industry – and then been abandoned.

It was as if your ancestors had invented the wheel – and then decided that they preferred log rollers.

In the words of our rock’n’roll sage, David Lee Roth, “He who knows how, will always work for he who knows why”.

In examining our history, it seems useful to consider not only how we did things (and changed doing them).

But why. And why not.

1972 was a big year for concert lighting. Including because of prominent appearances by the PAR64 on two major tours.

The path to the PAR64 led back to the 1930s, to the first PAR and R lamps, and to sealed beam headlights.

Until then, incandescent lamps had come as globes, to be mounted in reflectors, sometimes supplied with covers or lenses. In many applications, that made for a relatively complicated fixture; one subject to losses in output due to optical misalignment from shock, vibration, and re-lamping; and because of contaminant build-up on various surfaces.

Fabricating a single, complete assembly of a filament already encased in
a reflector with an integral lens radically simplified the fixture; allowed increased output thanks to precise formation and location of the optical elements;
and assured better maintenance of output over time.

In 1939, the U.S. government mandated the use of such “sealed beam” headlamps. Other applications included railroad, marine, and aviation; some of whose lamps we would adopt for “pinspots” and as “ACLs”.

The PAR38, introduced in 1942, found use in industrial, architectural, and display applications, although the “R”, was less expensive (if less efficient). In the 1970s, GE even sold PAR38s with integral interference film filters for vibrant colors.

PAR38, R, and PAR56 bulbs took over theatrical striplights. And both the PAR36 and PAR64 would become popular in film and television location lighting, including with integral CTB coatings, before the first CSI/HMI fixtures appeared.

The standard “wash” light for theater and television, the fresnel, especially in the incandescent era, was inherently inefficient.

Looked at it in cross-section, aside from that portion of lamp output reaching the fresnel lens directly, plus that fraction coming by way of its small spherical reflector, most of the light light radiated by the filament was wasted, warming the interior surfaces of the fixture itself.

Changing beam size by moving the lamp and reflector relative to the lens increases the fixture’s efficiency towards the flood setting, as they grow closer to the lens and a higher proportion of output escaped the fixture; reduces as it
as the fixture is spotted.

In the incandescent era, lamps also had large globes made of relatively low temperature glass, spaced away from large filament structures:

Halogen cycle bulbs began appearing in 1966. They needed high internal temperatures for the process to work; produced by using a small envelope, which in turn, required high temperature materials (initially including quartz).

The smaller halogen bulb allowed smaller fixtures to be designed around it.

Halogen bulbs could also be squeezed into PAR bottles, producing the 1000-watt PAR64. Initially, a 240-volt version wasn’t practical, so 120-volt lamps were used overseas, on series twofers (and even after 240-volt versions appeared, because the smaller 120-volt filaments made for a better-looking beam).

With an open-faced reflector having a dichroic “cold mirror” coating, an MR13 was made for projectors and an MR16 for display and architectural applications (which would be used to shrink the borderstrip). Conversely, a tubular halogen lamp, suitable for cyc lights, was offered with a hot mirror coating to reduce the power needed.

Optically, a PAR got much more of total filament output into its beam than did a fresnel; and from a lighter and simpler fixture.

That mattered to concert lighting, which tended towards saturated colors having low transmission (Congo Blue being legendary for only 5%). When systems were generally ground-supported on lifts of limited capacity, light and efficient PAR fixtures were of particular value. A PAR can’s simplicity also left little to shake loose during hundreds of miles of trucking between one-nighters.

For all its practical advantages, the PAR had seen little use as a solo instrument in traditional performance lighting, because of its fixed-size oblong beam
and abrupt edges. It was not, however, without fans. Beverly Emmons recalls:

“I loved the 1K PAR and miss it today. I first used it as back light with no color for the Merce Cunningham work called Rain Forest. That would have been in 1967. These were the single focusable units. Before the Rock and Roll Lighting of the 70’s there was the powerful rejection of colored light by the “Avant Garde” of the mid and late 60’s. The strong color that Tom Skelton and Nik Cernovitch were using in a lot of dance companies (see the Ailey Co. Revelations paper work in TheLightingArchive.org). Merce Cunningham, Meridith Monk and Joe Chaiken, among others, hated the use of strong colors. It was seen asa style of commercialization, glamour and emotion. The PAR can was perfect as it was very bright and had no discernible edges.

“I have used the 1K PAR can almost continuously my whole professional life.”

Early concert lighting had relied in large part on the 2kw 8” theatrical fresnel. The transition to the PAR came in 1971-72, much of it out of cross-pollenization between folks long in the New York music scene and those involved with NYU’s theater school and the Fillmore East, whose buildings were literally side-by-side.

Chip Monck had started up the Village Gate in 1958; toured extensively with folk artists; and lit the Newport Jazz and Folk Festivals. He’d used racks of 8” fresnels on single-column hydraulic lifts, on projects like the Concert for Bangladesh.

Chris Langhart taught and managed technical theater at NYU, before his major involvement with the Fillmore East and with Woodstock.

John Tedesco was one of a younger generation suggesting the PAR64 to Chip, during preparation for the ’72 Stones tour. Chip brought a short-barrel PAR can made for Four Star to Altman Stage Lighting, with whom he had a long relationship, and ordered some for the tour.

John combined the Genie tower with Altman’s fixture to produce the “lights in a box” first used with Zeppelin.

Altman’s dominance in the subsequent U.S. PAR64 market, with a version lengthen to improve gel life, would grow out of its use on both 1972 tours.

Earlier, in 1971, after the Fillmore East had closed, many of its key technical figures headed to London, to open a similar venue, The Rainbow, in the former Astoria movie theater, which had hosted rock concerts (and where Jimi Hendrix had first set his guitar alight). Experiments were conducted by Chris Langhart and Richard Hartman in New York, on a homebrew, rectangular “four-barrel” PAR64 bank using Very Narrow bulbs (which also internalized the necessary series connections); tested by shooting it down Fourth Street. Fabricated in the UK, it premiered in November 1971, when the Who opened the Astoria (briefly called the Odeon) as The Rainbow.

[I have reports that Brian Croft first brought the PAR to England in 1968, but have been unable, so far, to get any details.]

A Willing Prisoner of the PAR

Through the 1970s, the PAR64 would remain concert lighting’s instrument of choice, to be joined by the ACL in 250 and 600-watt sizes, and by the PAR36 for audience blinders. Unit counts would gradually increase, including because more labor-efficient designs made it practical.

In large venues, with longer throws, the PAR was underpowered. It required several to punch up a given area – multiplied by a four- or five-color system.

Consuming a sheet of gel per show and relying on relatively short-lived spot lamps, the concept didn’t “take”.

For the application, a better fixture than the PAR64 would be difficult to imagine. At least, not with the technology of the times.

Its combination of exceptional simplicity, economy, and power would make the PAR so difficult to replace.