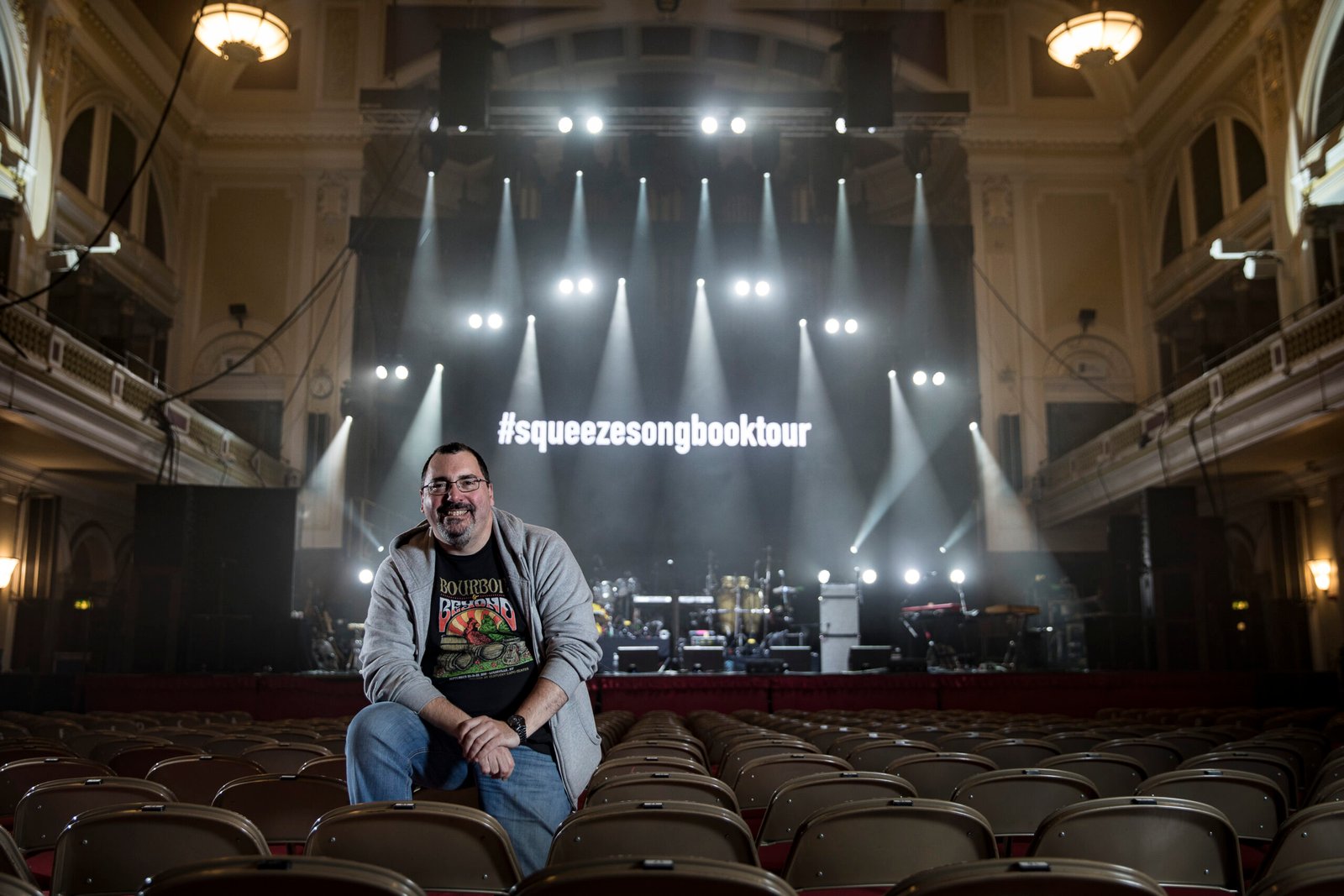 What is your name & location?

What is your field(s)?

When and how did you get started in the industry?

I have always been around the business. Dad was an actor and Mum a Stage Manager. I lit shows at school then went to the Welsh College of Music & Drama to study (?!) Stage Management, majoring in Lighting Design.

First job was operating an opera tour of Wales, then stage crew at Richmond Theatre, then warehouse slapping boy in a concert lighting company.

Which artists did you work for & when?

Can you describe the atmosphere when you first started in the industry?

Good question- things were still very professional, obviously, but the atmosphere was a lot more….. carefree, as it were. We were primarily, though thankfully not solely, young men who didn’t know that we couldn’t do what we were doing, so we did it anyway!

Pre-production was by phone and fax, drawings were mainly hand-drawn and copied, the rigs were all conventional in the main, so there was a lot more climbing of trusses. The LDs were the ones who went out to operate more often than not, rather than sending out operators. The rise of the “Creative agency” was a long, long way away.

Can you describe the atmosphere as you progressed in the industry?

Things have become a lot more “serious” in the upper echelons of each organisation with the growth of gigs and venues, exposure and so on. We still have a lot of fun, of course, but a lot more people seem to have opinions where they didn’t before.

Information became easier to access and share. Crews have become a lot more technical in much wider ways. Control has become a lot more comprehensive- an entire mega-rig can be controlled from one desk. Video and live footage has become almost ubiquitous in even the smaller end of the spectrum.

What was the process to put a design together?

It was, and still is, as far as I am concerned, a combination of consultation with the artist, and a balance of budgeting, truck space, numbers of crew available, time available for the whole production to load in, plus my own vision of how the artist should look, and of course the main element- actually listening to the music!

What sort of challenges did you incur?

See above. Some designers do, I feel, still design for themselves rather than listening to the artist and what they want.

That aside, touring with the bands I have, there has been a marked difference in the venues on each side of the pond especially. Many venues in Europe weren’t designed for the big shows that we put in, especially when you look at access and rigging. Some Maiden shows took many, many bridles up top which meant slow load-ins with the obvious knock-on effect of slowing the day up for other departments. In America, however, if we were doing the sheds, the access was normally much better and rigging a lot simpler. Rigs would just fly up and make the days easier for the other departments.

What sort of challenges did you have with your artists?

I have been very blessed in that most of my artists with whom I have worked have trusted me to do my job, because of my ability to interpret music, and create the correct atmosphere, and operate with (to quote many others) great timing.

Some artists have had some input, which I have respected, but there have been times when I have stood up for what I have believed in, and it seemed largely to work.

The worst part is the artists who think they know more than they actually do!! No names, obviously!!

What sort of technology did you have to make your job easier?

Back in the day? None, really! We didn’t have the option to take desks with us, so going from territory to territory usually meant starting from scratch.

Today, you can even take a desk on to a plane as hand luggage (when we could travel, of course!) to keep your show inviolate, and the ability to send plans, plots, showfiles, the entire virtual production in fact, makes the transition from territory to territory much smoother.

Please share any relevant experiences or fun stories from your past on the road.

Too many and too obscene in some cases!! I find that most stories that we find hilarious don’t translate well unless you know the people or the mentality of the people involved!

All I know is that I have spent a huge proportion of the last 35 years laughing with some of the best people on the planet.

What would you say to folks entering the industry now?

Actually, it’s the same as I have said for years. It is very hard to get into this business, but even harder to get out of it. (Look at what is happening now, for example, and how many of us are unable to find work elsewhere because we are too specialised in our fields and our skills don’t seem to be transferrable).

Other than that, if you are just starting out, keep your mouth shut, ears open and be nice to everyone! Today’s support band could be tomorrow’s employer! Don’t, however, be afraid to contribute ideas. Anyone can learn from anybody.

I miss my chosen career very much.I miss the thrill of adrenaline as the houselights go down. I miss the music and I miss the camaraderie of my road family.

Ours is a fantastic industry. It has provided me with many years of gainful employment, joy, frustration, laughter and the opportunity to see some incredible places and do things that I would have thought impossible for me otherwise.